TOOLS FOR PHARMACOGNOSY: MICROWAVES AND ULTRASOUND

The laboratory of Pharmacognosy of the University of Athens is involved in the extraction and analysis of natural products since decades. So far, the extractions method followed typical procedures like e.g. maceration for several days in solvents of different polarity. Despite its simple execution, this method is generally time and solvent-consuming.

Since a couple a years the use of ultrasound takes a greater place in the phytochemistry because of its simplicity of implementation and its efficiency. Its principle applied to the extraction of natural products could avoid us loosing time or a too big consumption of solvents and could increase the extraction yield.

We used an Elma S100 H ultrasound bath (Elmasonic, P=500W, f=50-60Hz). For tall the ultrasonic-maceration realized in the lab, the average extraction-time was around 1h instead of 1 day! More interesting, the consumption of solvent was lightly decreased and the yield of the extraction was increased of about 10% in best cases.

Now in our laboratory, most of the extraction by maceration are realized this way. Despite these excellent results, questions remain unanswered: What about those sensitive to heating? Could this method be applied to all the categories of natural compounds?

Concerning the extraction of essential oil, we used a Multi-mode Milestone START E micro-waves to perform hydrodistillation. A trial has been realized on 300g Corydothymus capitatus. The yield was the same than the one described on literature but the time was decreased from 3h to 15 min! GC-MS analysis are on going to determine the quality of the extraction. Engaged in the valorization of olive leaves products and especially their main active metabolite, oleuropein, we realized its microwave assisted extraction using a mix EtOH/H2O (8/2) with an irradiation of 200W during 10 min. Oleuropein was obtained with a yield of 34%.

Our laboratory is also involved in the synthesis of natural compounds. In this perspective, the quest for better yields and easily replicable methods on pilot scale is constant and the use of Micro-waves technology is an alternative first choice.

We used a Single-Mode CEM Discover Microwave to optimize the last step of the synthesis of a powerful GSK-3β inhibitor.

According importance to all eco-friendly and modern technologies, our use of ultrasound and microwaves becomes more and more important and starts to change our way of working. They allow us to perform faster and cheaper extraction, to optimize the yield of our synthesis and to propose methods potentially applicable on pilot-scale. Given the growing impact of sonochemistry, we’ll develop soon chemical synthesis integrating this technology.

2.4 Kg of aerial parts of Genista halacsyi were extracted with methanol affording 20 gr of dry extract (Ghal). HPTLC: A semi-automated sample applicator, CAMAG Linomat 5, was used for spotting HPTLC plates and a densitometric UV scanner, CAMAG Scanner type 3, was used for plate analysis. Both instruments were controlled by Wincats software version 1.4.4. TLC plates 20 × 10 cm, silica gel 60 coated on aluminium foil were used. Samples were applied as 6 mm bands using the applicator. Plates were developed to a height of 8 cm in a glass chamber saturated for 15–20 min with H2O/ACN 70/30 + 1% Acetic Acid and scanned at various wavelengths using the UV scanner. Quantitative evaluation was done via peak areas. Spot identification was based on Rf value comparison with standards, which was confirmed by a UV scan from 200 to 400 nm. HPLC was performed with a Thermo Finnigan HPLC system (ThermoFinnigan, San Jose, CA) connected to a Spectral System UV2000 PDA detector and an autosampler. ChromQuest 2.1 software was used for the management of the data. Column was Supelco RP-18 HS C18, 250 x 4.6 mm i.d., 5.0 μm (Discovery). The mobile phase was H2O + 1% acetic acid/MeOH in gradient method. Elution was monitored at 240 nm and the injection volume was 20 μl. Nuclear magnetic resonance (NMR) spectra were obtained on Bruker 600 MHz spectrometers using MeOD (Aldrich) as solvent. Coumaric acid was used as an internal standard. 1.6 gr of olive leaves were extracted with acetone affording 388 gr of dry extract (OLE_A). 200 mg of OLE_A were enriched with the active compounds by precipitation with CH2Cl2:MeOH 88:2 (OLE_AA). Pure oleuropein, isolated in our laboratory by means of FCPC was used as a standard. Stock solution (1 mg/ml) in MeOH was used for the standard calibration curves.

1. Quantification of oleuropein, an important biophenol in differently processed extracts of olive leaves.

Calibration curves were constructed for HPLC, HPTLC, NMR by plotting peak area against concentration over the range 25-150 μg/ml, 1.5-4 μg and 1-10 mg, respectively. For the quantitification of oleuropein with HPTLC 5.5 μl from stock solution (1 mg/ml) in MeOH of OLE_A and 5.0 μl from OLE_AA correspondingly. 150 μg/ml from each extract were injected to HPLC (made from the same stock solutions) and 8 mg (taken from the same stock solutions) were measured at NMR, for comparison of the oleuropein content. All the analysis were performed in triplicate.

The results from the analysis indicate that HPTLC methods are highly reproducible, reliable and most importantly in good agreement with routinely used methods (HPLC, NMR). HPTLC can be used to standardize the active constituents of herbal extracts.

4 μl of stock solution (10 mg/ml) in MeOH of Ghal were applied on the TLC plate and was observed at 254 nm and 366 nm. Mainly isoflavonoids, O-glycosides and 8-C-glycosides, were isolated.  HPTLC fingerprinting profile can be used as a diagnostic tool to determine the quality and purity of a plant material and to identify marker compounds. 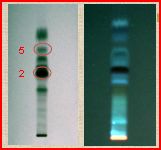 HPTLC estimated Rf were used for the determination of KD for elaboration at CPC analysis. The above mentioned methanolic extract of G. halacsy was used and the Rf of compounds 2 and 5 were calculated. Gradient solvent solutions (6 systems) of hexane:ethyl acetate:butanol:methanol:water were developed, keeping methanol and water amounts stable in all systems. The order of elution was compared with HPLC analysis, which is typically used for KD determination. HPTLC can efficiently be used in methodology creation in CPC, being as accurate as HPLC and in parallel more cost effective, faster and simplified.

The analysis of extracts of Vicia faba, Lotus logisiliquosus, Tetragonolobus purpureus andGenista halacsyi took place by off line coupling of CCC technique with sephadex column or preparative HPLC. In the case of Lotus edulis, Lathyrus laxiflorus, andGenista hassertiana was achieved the direct isolation of active compounds (flavonoids, isoflavones and phenolic acids) from the complex extract using dual mode or gradient mode CCC. Fabaceae family contains plants that are characterized by significant biological activities. The main edible plants of this family constitute an important part of the Mediterranean diet and contain secondary metabolites with considerable estrogenic, antioxidant and chemo preventing activity [1]. Recent years CCC has become a method of choice in separation and purification of natural products. The advantage of this method is the ability to separate substances from large volume of crude and complex extracts which is crucial in further analysis as far as identification and biological control activity [2, 3]. In this study we demonstrate the application of CCC as a main separation technique in the phytochemical analysis of seven active extracts of Greek Fabaceae species. 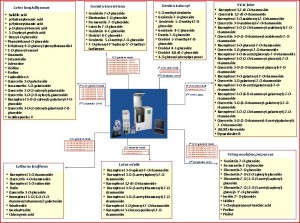 It is worth noting that the phytochemical analysis ofLotus logisiliquosus, Tetragonolobus purpureus andGenista hassertiana is presented for the first time.The purity and identity of isolated compounds was confirmed by NMR and HRMS spectroscopy. In conclusion, it is clearly indicated that counter-current chromatography is a valuable technique and was successfully employed for rapid and effective separation of natural compounds from crude active extracts of Fabaceae plants.

Skin is a major target of oxidative damages due to the constant exposure to exogenous factors, such as UV-irradiation. Free radicals and reactive oxygen species (ROS) are involved in the mechanism leading to cutaneous damages, such as early ageing, inflammatory disorders and skin cancers (1). Many skin protective formulations contain antioxidants, which can interrupt the radical-chain processes, help the skin to repair systems, improve cell rejuvenation and prevent skin-cancer (2). The aim of our project is to discover and carry to the stage of development candidates, plant derived small molecules with potential as new cosmetic agents with antioxidant and UV-protective properties. The structure of our work was initially to evaluate the antioxidant and UV-protective effects of natural products belonging to different categories. Based on this screening results, Greek flora is analyzed for species/genera/families and a plant inventory of 450 species expected to afford desired active candidates is established. Methanolic and ethyl acetate extracts of selected plants are evaluated for these properties.

The antioxidant activity of 480 compounds and 900 extracts was assessed in a cell-free system by measuring the decrease of free radical DPPH detected at 517 nm after 30 min of incubation. Compounds and extracts with high antioxidant activity in DPPH assay were evaluated for their capacity to reduce the intracellular reactive oxygen species (ROS), i.e. to act as antioxidants in the cellular context as well. Samples were applied overnight to human skin fibroblast cultures at the highest non-cytotoxic concentrations (as assessed by MTT assay), and DCFH-DA fluorescence was measured at 520 nm after excitation at 480 nm (Tables 1 and 2). 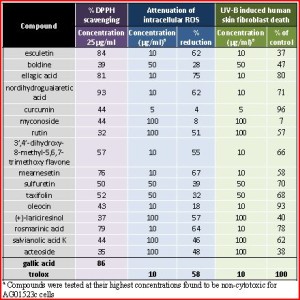 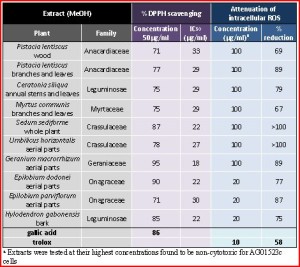 The aim of the project is to discover and carry to the stage of development candidates, plant derived small molecules with potential as new cosmetic agents. Greece, in particular, is well known for the richness and diversity of its flora that consists of at least 6300 species and subspecies. A significant proportion of Greek land is covered with high mountains, which form some of the most interesting botanical localities. Over 15% of Greek flora is endemic and it is not found anywhere else in the world. Despite their great importance only a small proportion, approximately 10%, of the classified plants have been investigated and chemically characterized. They produce a wide variety of the so-called “secondary metabolites” or “small molecules”, which are usually candidates for drugs, cosmetics or other technological developments, directly or as an inspiration for unnatural products.

The free radical formation induced by UV is at the origin of most cellular and molecular processes leading to premature skin aging. Protection can be obtained via UV-blocking agents or antioxidants and radical scavengers. Radical scavenging activity of selected small molecules against stable DPPH. (2,2-diphenyl-2-picrylhydrazyl hydrate) was determined spectrophotome-trically. When DPPH. reacts with an antioxidant compound, which can donate hydrogen, the amount of free radical is reduced. The changes in colour (from deep—violet to light—yellow) were measured at 515 nm on a plate reader (TECAN). The decrease in optical density of DPPH induced by test samples in relation to the control was used to calculate the antioxidant activity. IC50 values, which correspond to the required amount of each sample to scavenge 50% of the DPPH free radicals, were calculated for the most active compounds (% Inh > 80 at 75 μg/ml).

Anti-tyrosinase (anti-hyperpigmentation) activity of the selected molecules was determined using the 96-well microplate method described by Masuda et al. [2], based on their capacity to inhibit the activity of mushroom tyrosinase when co-incubated with its substrate L-tyrosine and its co-substrate L-DOPA. Initially, compounds dissolved in DMSO were tested at final concentration 150 μg/ml and the percentage inhibition of tyrosinase activity was determined. IC50 values were calculated for the most promising molecules (% Inh > 80 at 150 μg/ml).Tyrosinase is a multifunctional, glycosylated, and copper-containing oxidase, which catalyzes the first two steps in mammalian melanogenesis. Although melanin has mainly a photoprotective function, the accumulation of an abnormal amount of melanin in different specific parts of the skin resulting in more pigmented patches might become an esthetic problem.

The analysis of biological screening data proved that phenolic derivatives, phenylpropanoid glycosides and stilbenes are the most promising secondary metabolites. However, other scaffolds also showed good antioxidant or/and anti-tyrosinase activity. Based on this analysis, small molecules databases and chemotaxonomy literature were mined for distribution of the desirable scaffolds, and for decoration patterns around these scaffolds. The Greek flora was analyzed for species/genera/families expected to contain the desired scaffolds and decoration patterns and a plant collection of around 450 species, belonging to 68 plant families of the Greek flora, is established. 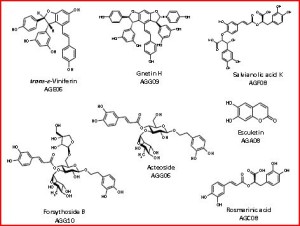 A state-of-the-art technology platform for miniaturized natural product discovery will generate focused sub-libraries around these privileged scaffolds. Further evaluation of these sub-libraries will lead to the development of novel products in cosmetics with new or improved properties over existing active ingredients.